Over half a million visitors in one day, a full-day livestreaming program, eight virtual meet & greets with surprise visits from members of the Royal Family, close to 1,250 crowd-sourced videos, and a big thank-you from the King himself on national television – not bad for an online platform that, two weeks earlier, was nothing but a bold idea. Koningsdagthuis.nl definitely succeeded in keeping the Dutch national spirit alive in times of crisis!

With the entire country on lockdown, it was clear that King’s Day had to be celebrated differently this year. To encourage people to stay at home, SparkOptimus was asked – just two weeks in advance – to design and build a digital version of King’s Day. We had built online platforms before. We are used to deliver projects under pressure and on short timelines. But never before were our potential clients 17 million people, one of our most important guests the Royal Family, and the timeline from ideation to go-live only two weeks.

In this article, we will give you a look behind the scenes of Koningsdag Thuis, and share our five key takeaways from this once-in-a-lifetime project.

Going back to the very beginning

In the weeks leading up to King’s Day 2020, many Dutch municipal governments were wondering how King’s Day celebrations would take place this year. They were worried about whether people would follow the strict lockdown rules on a national holiday that has traditionally always been marked by people going out on the streets en masse.

Out of this concern, SparkOptimus started thinking about a way for people to celebrate King’s Day 2020 at home. Managing partner Alexandra Jankovich and manager Vincent Vollebregt together formed the outline of what a fully virtual King’s Day could look like. Taking the holiday’s key ingredients, they defined a digital equivalent for each of the elements that make up King’s Day.

This vision was the basis of everything we did afterwards. It guided our decision-making process, helped in getting others onboard, and most importantly led to the immediate request to turn it into reality. This was when the rest of the SparkOptimus team – Marinus Israel, Denise Klop and Thijmen Kaster – was brought in, with Frank Stoer, Roxana Seiler and Vivian Schobben joining later in the project. 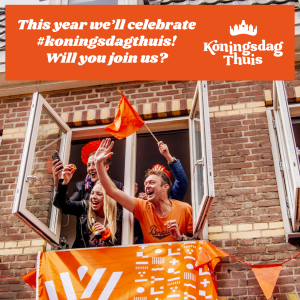 First, we had to convert this initial vision into a concrete concept. We decided to focus on the (local) performances, as other parties had already started initiatives to build digital equivalents of big performances and flea markets.

In those first days a lot of exciting ideas came up, like live streams and digital meet & greets between celebrities and their fans. Sometimes our enthusiasm had to be curbed by a reality-check. For example, everyone loved the idea of enabling performers to ask for donations for a (local) good cause, but this seemingly simple idea proved too difficult to implement. Problems we had to solve were:  How can we combat “donation fraud”? Can we integrate donation websites with our platform? We started out allowing donation requests during sign-up, but soon realized it was impossible to pull off in the limited time we had. Moreover, it confused people signing up on the platform, so unfortunately we had to scrap donations.

Teaming up with partners

Immediately, we knew that SparkOptimus could not get this off the ground on its own. We are not developers, we were not connected to all the local organizations that organize King’s Day throughout the country, and we certainly did not have the technical infrastructure to host such a huge digital event. These last two issues were quickly solved by bringing Google and the KBOV (the Royal Association of Orange Societies, the national umbrella organization for all the local organizations that organize King’s Day festivities) in as partners. Soon after, Incentro joined as our development partner. They are experts in using Google Cloud and have ample experience with quickly building platforms.

Each party had a different role. SparkOptimus was responsible for overall project coordination and vision, operations and handling content. Incentro would design and develop the platform, and coordinate the Koningsdag Thuis social media channels. Google was to provide the technical infrastructure for the platform and the software for the digital meet & greets. And – last but not least – the KBOV took on the role of media spokesperson and our connection to their local organizations. Representatives from all these parties convened daily in virtual steering committees to align and jointly take decisions.

Building a video platform that could be visited by an entire country during a single day raises some technological challenges. For example, how do we make it safe to use? How do we make sure it does not go down due to a massive number of simultaneous visitors? How can we prevent “unwanted” content from appearing on the platform? We decided to leverage existing content platforms like YouTube, Facebook and Instagram. Not only are these already well-known to the public and easy to use, but this also brought scalability, security and automated content moderation out of the box. A couple less things to worry about!

Development started on the Thursday of the first week. After meeting our first deadline – launching the registration page of our website on Wednesday – we moved the focus to developing the platform itself. We started by creating a longlist of features and prioritizing these into “must haves”, “should haves” and “could haves”. Being rigorous is important here, even if this means deprioritizing features loved by the team. By the Friday before King’s Day, it was clear that we would not be able to get all our “should have” features ready on time. An even more ruthless (re)prioritization round followed, which only those pages survived that we would need at the very minimum to go live: video category overview pages to see all the submissions, and a video detail page on which you could watch videos. This meant that the homepage – usually the first page to work on – actually became a second priority. 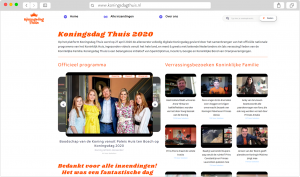 Getting the word out

A fully-functioning platform is worthless if no-one knows it exists, so we immediately started spreading the word. First and foremost, we needed content – preferably yesterday. We asked famous Dutch people to share a short teaser video announcing that they would celebrate King’s Day at home and broadcast a performance or activity on Koningsdag Thuis. Soon we had an impressive list of ambassadors that included astronaut André Kuipers, Olympic medal winner Anky van Grunsven, national soccer coaches Sarina Wiegman and Ronald Koeman, singer Jeroen van der Boom and many more.

As an online platform, the natural thing is to generate awareness online through social media. However, being entirely new meant having zero followers. Luckily, our ambassadors’ social channels gave us an instant reach of several hundred thousand followers, while building our own follower base at the same time.

Traditional media remains powerful in reaching nationwide coverage. Our ambassadors contributed immensely by talking about our initiative on national talk shows. Each appearance resulted in platform traffic going through the roof. And last but definitely not least, it helped tremendously to have the Royal Family on board. When the King mentioned our platform in his speech, traffic skyrocketed to over 35,000 simultaneous visitors and crowd-sourced content shot up from 300 at the start of the day to almost 1,250 when it ended.

While enjoying the ride!

Reflecting on those two intense but energizing weeks, all of our team members agree: it was amazing to be able to pull this off, and we had a lot of fun doing it! Despite the long hours, and sometimes stressful situations, there were very little disagreements within the team and everyone was extremely humble and united while working towards the common goal of making Koningsdag Thuis a success.

Every morning the team would convene at “the big wall of post-its” to discuss and (re)distribute the to-do’s. Sometimes this meant handing over a part of the project you loved working on to someone else, because they were in a better position to handle it. Other times this meant tackling issues you had no experience with or even disliked altogether, such as finding your way in the intricate web of privacy regulations. And most of all, it meant picking up the slack – whenever and wherever it occurred. Because of this attitude, all Sparkies involved performed a myriad of roles over these two weeks. Project management and product ownership, PR and marketing, social media, content, security, privacy, customer service, operations, artist management, analytics – each team member can now add at least ten new roles to his or her LinkedIn profile.

And even with all of this hard work, there was still time for fun. Each “victory” – however big or small – was properly celebrated, some evenings we turned our “war room” into a club scene with music and even disco lights, we got into the habit of treating our fellow teammates to “oranje bollen” from the bakery around the corner and we topped it all off with a real champagne toast on the day itself! We definitely worked – and celebrated – as a team, which enabled this project to become such a huge success.