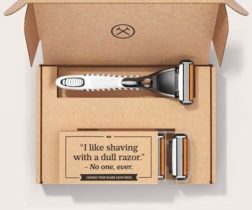 This week’s big news was the $1B acquisition of Dollar Shave Club by Unilever. The razor blade subscription start-up went viral after their 2012 YouTube video, prompting 12,000 orders within 24 hours of releasing the video. Within a few years, Dollar Shave Club captured around 8% of the market. Clearly, such rapid growth would not have been possible in the pre-digital era, where setting up a company that aims to compete with the likes of Gillette would require significant investments in all business aspects, from manufacturing to sales & marketing. Dollar Shave Club in comparison ran its sales operations on Amazon Cloud Services, a cloud computing service aimed at (small) e-commerce companies. A razor-sharp YouTube video did the marketing trick.

Although bringing in a record amount, Unilever’s acquisition of Dollar Shave Club fits into a clear pattern. Just last week, Danone, a multinational food-product cooperation, bought Whitewave foods, an organic food producer famous for its silk almond milk and organic farm salads. More major acquisitions are expected this year with for instance Mondelez, producer of Oreo cookies, being on the haunt for chocolate manufacturer Hershey’s.  Across categories, from personal care to food & beverages, we see a steep rise of established players taking over smaller, more innovative firms.

As for why we see incumbents on such a start-up shopping spree, market developments seem to provide an explanation. In the past years, many large consumer and retail companies have faced a steady decline in market share, as they struggle to deliver innovative products and business models. As with the biblical David versus Goliath, start-ups have taken away market share from established players by addressing customer preferences in new ways and offering appealing products, often against significantly lower prices. For instance, Danone lost 19% in market share in the yogurt industry between 2008 and 2013 while upcoming brands like Chobani gained 19%. This struggle to innovate is underlined by incumbent’s R&D expenditures. Unilever spent a mind-boggling $8B on marketing last year but reserved only a little more than $1B on R&D, while soft drink producer Pepsi spent $2.4 billion on marketing and reserved only a little more than a quarter of that for R&D. Clearly, marketing existing best-sellers is preferred over the search for new champions, which is “outsourced” to smaller and more risk-taking companies like Dollar Shave Club.

Although this might seem like a risk-free way to incorporate new customer propositions, it is a costly one. Moreover, innovation-obsessed giants like Amazon are looming around the corner, putting on additional pressure. So for the short term, Unilever’s acquisition seems like a razor-sharp move. But as Dollar Shave Club has shown us, razors lose their sharpness quickly, requiring a more cutting-edge solution to the innovation battle.

Read more of our blogposts on our blog

Paving the way for future growth – Promotions at SparkOptimus

#1 digital consultant in Emerce100 for the fifth time!