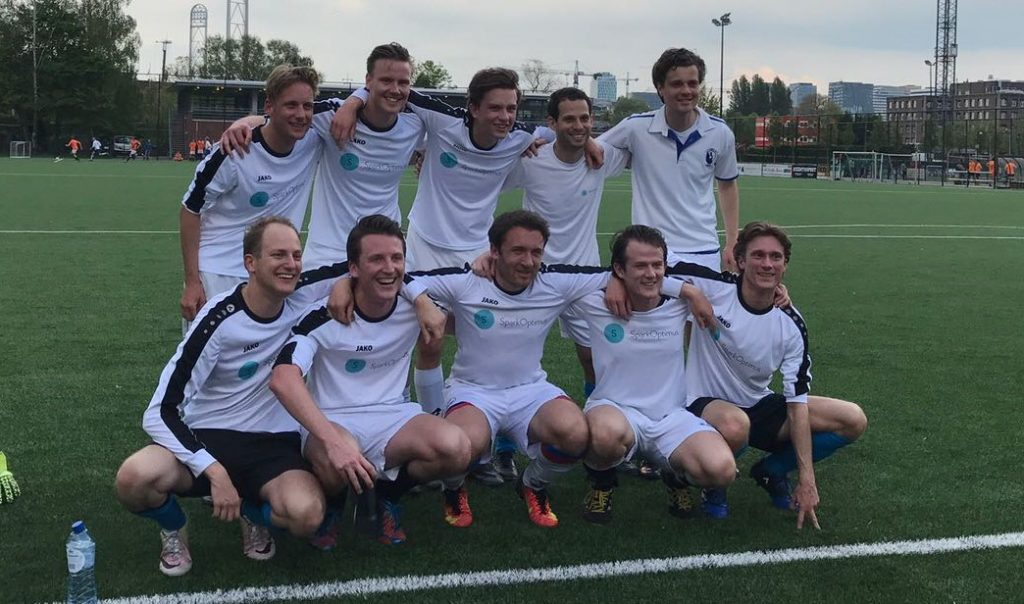 This year was the first time SparkOptimus joined the annual football Consultancy Cup between strategy consulting firms in The Netherlands – and we immediately proved that we’re fierce competition. Under Jonathan’s leadership the team – which also plays in the Amsterdam Powerleague every week – finalized their preparations during their tactical meeting during the Friday lunch. The fans at the office were even better prepared and brought a hand-crafted banner saying: “SparkOptimus: Disrupting the playing field.” On the night of the Cup the team was supported by a great number of Sparkies, with Alexandra leading the fanclub.

The first match against McKinsey was immediately the one with the highest stakes in the game, as it was a re-encounter with a former employer for some Sparkies. After a rough start SparkOptimus managed to secure the victory with two goals, one of them from a particularly beautiful free-kick. The second match against Bain was decided quickly, although the goalkeeper’s skills were tested a couple of times. The third match against BCG was a well-fought and -deserved victory in the burning Amsterdam May sun. After the last game – a tiki-taka run-over that even included header goals against Strategy& – the blue/whites were on top of the league with the full 12 points possible after 4 matches. Next: the semi-finals. This re-match against BCG was a tough one. Both teams decided that with depleted energy levels defending was easier than scoring and this resulted in a physically heavy Mexican standoff lasting the whole match. Penalties had to decide which team was worthy of the final. In this unlucky lottery SparkOptimus unfortunately drew the short straw.

Beers, BBQ and fans awaited in the club house, and we can be proud of our first performance in the football Consultancy Cup: a great way to meet the other strategy offices and above all a fun experience. See you next year!