Once every three weeks on Friday, the SparkOptimus office gets served a delicious Syrian lunch. This lunch is prepared by Hind Cooking. Sophie Heijenberg, associate at SparkOptimus, visited founders Hind and her husband Mahmoud, both Syrian natives, in their store in the World Food Center Amsterdam to hear their incredible story.

Sophie: “Hind, Mahmoud and their three kids fled from Syria to the Netherlands in 2015. Before the war started, they lived a good life in Qatar. The family decided to travel back to Syria for the delivery of their third child. On his day of birth, the war started and they did not manage to escape the country for four years. The government of Qatar invalidated their visas due to the war, meaning they could not go back home. Several extremely tough and scary months of travel brought them to the Netherlands.

“After having lived in eleven different “AZCs” in seven months, the family finally got assigned a house. Their children are now attending Dutch schools. Through an empowering event for women in the AZC, Hind befriended some Dutch women. One of them was Alexandra Jankovich, Managing Partner at SparkOptimus. When cooking for her Dutch friends, Hind was encouraged to start a catering service. Although she worked as a manager for years, she decided to go for it and launched Hind Cooking. Alexandra saw the perfect match. Hind Cooking is led by inspiring and optimistic people that are pragmatic and kind, despite everything they experienced. Their ambitions perfectly fit SparkOptimus’ values and, not unimportant, their food is delicious! We proudly became their first corporate client.

“Hind and Mahmoud are currently growing their catering service. With the money they earn, they feed three Syrian families next to their own. I am touched by their story, but also inspired by their persistence and kindness. Hind and Mahmoud really appreciate the small things in life. They are beautiful people and I wish them all the best in growing their business and making their dreams come true!” 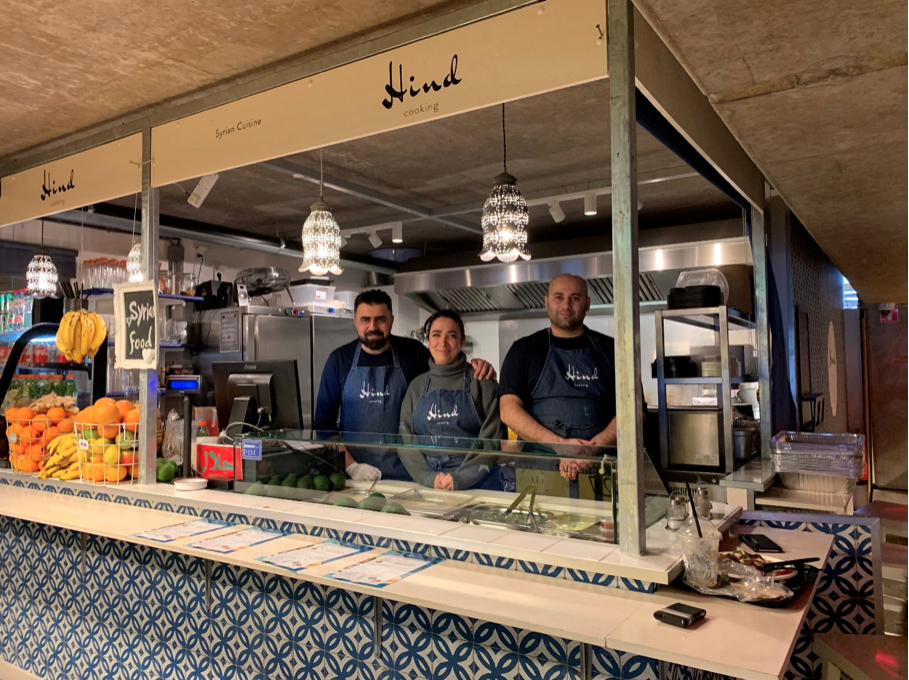 Hind, her husband Mahmoud (left) and their friend from Latakia, Syria who fled to the Netherlands as well and now works for Hind Cooking